This is the last in a series of columns about Walla Walla’s wine industry. I previously proposed that Walla Walla has “come of age” as a leading wine region. How did it happen? No single factor can explain it all. Previous columns have examined two of the five “pillars” of the region’s success, the Land and the People. In this final column I’ll quickly discuss history, culture and what I call “the spark.”

“You Florentines are the fifth element,” Pope Boniface VIII proclaimed in 1300, reflecting a popular view of the unique contributions of Florentine citizens. Earth, air, water, and fire could be combined by all men to produce the simple goods of everyday life. But when the Florentine “fifth element” was added, a new and more creative alchemy was possible.

These lines back appeared in my 1990 book Mountains of Debt, which told the story of financial crisis in Renaissance Florence, Victorian Britain and Postwar America. I repeat them here because it seems to me that a modern day papal visit to Walla Walla might produce a similar sort of comment (although the current pope might include a reference to Malbec since he’s originally from Argentina).

I don’t mean to flippantly compare today’s Walla Wallans to the great artists of the Italian Renaissance, but it is true that Walla Walla wine is having something of its own renaissance and the Fifth Element, which I earlier called “the spark,” is certainly part of the story.

It is a property of the fifth element, if we take Florence as a model, that if it exists it is not in one person but everywhere within the culture that supports it and you can see that in Walla Walla today, which is bustling and growing in terms of its wine industry after a few hard Great Recession years.

The group that I call The Pioneers clearly had that fifth element spark — creative, entrepreneurial, determined. They started wineries but they also helped build the industry in many other ways — I think of Myles Anderson’s efforts to breathe life into the Walla Walla Community College Viticulture and Enology program must be recognized, for example. That program provides an affordable way for a surprisingly diverse group of students to prepare for immediate employment in the wine sector. It has helped power the growth of the industry here and throughout the region.

Christophe Baron’s “discovery” of the rocky vineyard sites in Milton-Freewater get a lots of attention — perhaps only a crazy Frenchman (a “bionic frog” according to one of his wine labels) could have built Cayuse into the cult wine that it is. Now that I have walked the vineyards and tasted the wines, I have to admit that the fuss is justified. Christophe must have a bit of the Florentine in him.

All important wine-growing regions must at some point go through a time when many creative people combine to create a new reality and identity and it is easy to see the renaissance in Walla Walla today.

Walla Walla’s current blossoming has deep roots — deeper than most probably suspect. The first vines were probably planted (and wines made) about 200 years ago by French Canadians who settled in these parts between 1812 and 1821. Walla Walla was an outpost of the Hudson Bay Company empire in those days and, although there is no proof of vines and wines, everything we know about how the French Canadians behaved elsewhere suggests that a permanent settlement would not be wine-free. 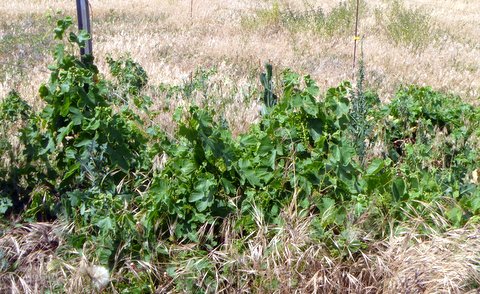 We know for sure that there were wines and vines about 150 years ago because there is evidence that the early settlers in the valley planted vines and even organized grape nurseries using plants imported from Oregon.  Frank Orselli, a native of Luca, Italy, came to Walla Walla in 1859, according to Ronald Irvine’s history of Washington wine, The Wine Project, part of an important Italian influence that can still be seen today. The wine industry thrived along with Walla Walla until the Northern Pacific Railroad construction by-passed the town in 1883, diverting growth elsewhere.

The wine didn’t go away, of course, and we were fortunate to see evidence of those Italian winegrowers when Kevin Pogue took us on a visit to the Rocks vineyard area. There, growing wild on the side of the road, where Cinsault grapes that someone still took the time to tend and harvest. Cinsault — Black Prince grapes they were called. Gary Figgins, whose winery is named Leonetti for the Italian side of his family who farmed and made wine here, is credited with tracking down the Black Prince’s true title. Cinsault is still grown in Walla Walla and wine is made. You will get a big smile from the locals if you ask for it! 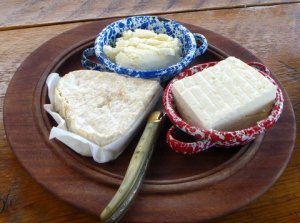 Culture is the last of the five “pillars” of Walla Walla’s renaissance and you can see it all around you when you visit, especially downtown where a cluster of tasting rooms have erupted with cafes, restaurants and shops to support them.

We met two people who seem to represent the cultural renaissance in this area. Dan Thiesen is executive director of the culinary arts program at the Wine County Culinary Institute at Walla Walla Community College. Under Dan’s leadership this program has blossomed, creating affordable opportunities for those seeking culinary training and providing skilled professionals for the region’s expanding food scene.

We had two meals prepared by Dan’s talented students and had the opportunity to hear him speak about the world class program that he is building. The sky’s the limit for this program and the food-wine pairings it supports.

We also met with Joan Monteillet of Monteillet Fromagerie  just outside of nearby Dayton, Washington.  Joan and her French husband Pierre-Louis raise sheep and goats to supply their small artisan cheese business.  A visit to the fromagerie is an opportunity to connect with the food’s roots and to sample the cheeses with wines specially created for the purpose by a local producer. It is a very personal experience of the sort that wine people seek out. A perfect part of the cultural renaissance.

The Monteillet Fromagerie has become an unintended test for the local community — does it really want to embrace the renaissance opportunity? Apparently a special use permit is required for the farm’s cheese and wine sales and agri-tourist operations, which exist within a designated farming zone, and there is organized opposition to the Monteillet’s continuing operations. Hopefully community leaders will embrace the logic that has helped the wine industry to advance elsewhere in the valley and keep this part of the local culture alive and allow it to thrive.

Leave a Reply to A Famished Foodie Cancel reply