Let’s climb in my time machine and go back a few years to 2008-2009, when the impact of the global financial crisis was beginning to be felt in the wine markets. It was a pretty gloomy time and there was a lot of talk about the need to reset our expectations to the “new normal.”

Gone were the days of great expectations as everyone scrambled to cope with the changing economic and consumer environment. What did we imagine the future would hold? Well, opinions varied, of course, but the “conventional wisdom” generally revolved around a few dire trends.

Trading Down and Trading Over

One of the most-cited trends was trading down. It sure looked like wine consumers were pulling away from wines at higher price points and shifting to less expensive products — or even moving away from wine altogether. Here’s a video that captures the moment fairly well (it was the first time I was ever interviewed by an animated character)

Trading down seemed like an unstoppable force at the time, although I suggested that it was more complicated. I noticed the strength of the Barefoot wine brand and proposed that it wasn’t just the price of the wine that made it so appealing to recession-battered wine drinkers, it was also the casual image that it offered with its surfer dude footprint in the sand style.

No one wants to admit to themselves that they are trading down, I wrote. Not good for self-esteem. But we can all embrace the idea of trading over — over to a more relaxed, less serious (and incidentally also maybe less expensive) idea of wine. Relax (there is even a brand of Riesling called “Relax”) and just enjoy wine. That’s what I thought I saw in the marketplace.

Whether it was trading down or trading over, the result was the same: the $20 and up segment of the wine market was declared a “dead zone” where nothing moved.  People still drank more expensive wines, then just didn’t buy them. They “drank up” from their cellars rather than “trading down” at the wine shop.

Wineries found that many wine club members were pulling back from scheduled shipments. Restaurant wine sales took a very big hit, too, as consumers dined out less frequently and economized on wine purchases when they did. Restaurants coped by trading down themselves, putting more pressure on wineries. 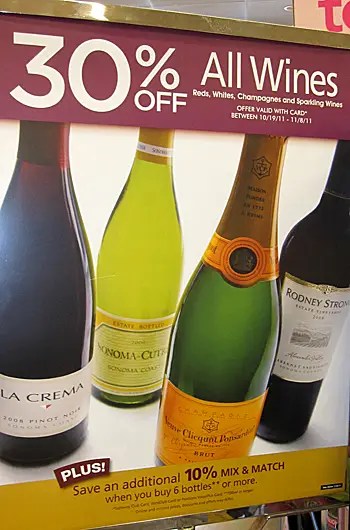 Some wineries held their prices and absorbed inventory accumulations rather than discount or dumped excess wine on the bulk market (where Cameron Hughes and others found some outstanding bargains for their customers). They saw price cuts as a one-way street. You can lower prices, but can you raise them back up again when good times return?  Some wineries split the difference by bringing out second labels to sell for less — chateau cash flow wines — while holding the price line on prestige brands.  Lots of mistakes were made along the way and some wineries fell out of the market.

Many discounting strategies were rolled out. Safeway stores began running promotions where $20+ wines could be purchased for 30% off the regular price (or 40% off with a 6-bottle purchase) — a clear attempt to reduce inventories in the “dead zone” category. A number of “flash sale” wine websites appeared that allowed wineries to sell off surplus stock quickly and outside of the usual sales vectors.

Sometimes wineries found themselves caught in competition with their own wines as buyers (wine club members, restaurants, a few distributors) dumped their stock back on the market, under-cutting carefully calculated producer pricing strategies.

There were some great bargains for buyers who recognized them (and had the credit card headroom to take advantage), but there were not very many true winners among wine producers, especially those in the higher price ranges. The frankly defensive strategy of generating cash flow while protecting key price points was the best that many wineries could hope for.

Up the Down Staircase

Would consumers shift back when the recession was over? Not many people held out hope for a reset of the reset. So the current state of the U.S. wine market, which Jon Fredrikson has called “A Tale of Two Markets” comes as something of a surprise.

The U.S. wine market has split in two as the table above shows. (The table shows recent data for off-premises wine sales as measured through the particular retail channels monitored by the Nielsen Company. These data are indicative of what’s going on in the broad market.)

While the market is expanding at a moderate +3.4% pace (at least it is growing, unlike wine markets in some Old World regions), there is a clear division between wines selling at prices below $9 and those that sell for more. Although the cheaper wines make up the majority of the market by volume, they are shrinking in dollar sales value, especially the $6.00 to $8.99 segment.

More expensive wines, on the other hand, represent a rising market segment. All price segments over $9 are growing as per these data, with the fastest growth at the highest price point — $20 and above!

This is truly a dramatic turnaround for U.S. wine. What is behind this unexpected change?  I’ll survey the new conventional wisdom in my next column.

BTW that’s a really old picture of me in the video — I hope that  I’ve improved with age since 2008. The Costco reference is a bit off in that interview, too. Costco sells wine at a low mark-up, but they don’t try to compete at the very bottom of the market as the video images suggest. I don’t think I’ve ever seen boxes of Franzia at a Costco, for example.