Cam watches Ken nurse the cork out of a bottle of 1960 Taylor Vintage Port.

The last Saturday of February is a holiday for wine lovers: Open That Bottle Night (OTBN). It’s the evening when wine enthusiasts come together to share wine and stories.

Although the wines are the official reason for these gatherings, the people and their stories are what it is really all about.

This year Sue and I will be getting together with Bonnie & Richard, Ron & Mary and Michael & Lauri at Ken & Rosemary’s house in Seattle. Everyone’s bringing wine and a story about the wine and Rosemary is making another of her spectacular meals. I’ll report the specifics in a note at the bottom of this post.

The premise of OTBN is that wine is different — or maybe that we are different when it comes to wine.  Americans are famously interested in instant gratification — we want what we want when we want it. That’s one reason the U.S. saving rate is sometimes a negative number. Can’t wait — gotta have it now. That’s our typical consumption profile.

Isn’t it interesting, then, that we sometimes behave in exactly the opposite way when it comes to wine. Yes, I know that 70% of wine is consumed within a few hours of its purchase. That is unexceptional.

No, what I’m talking about is our counter-stereotype tendency to tuck special bottles away and save them for … for what? For the right occasion, I suppose. For the moment when they will mean more than they do just now.  Sometimes it is about proper aging of the wine, but usually there is an intangible component that transcends the bottle’s contents. For whatever reason, it seems we need to be reminded once a year to get these wines out and enjoy them!

Frequently (in my case, at least) we hold them too long so that when the cork is finally pulled the wine within is a shadow of its former self.

The interesting thing is that it usually doesn’t matter that the wine has faded away. Turns out it was the story that mattered most. Liquid memory!

John Brecher and Dorothy Gaiter invented OTBN in 2000 as a way to celebrate wine by releasing its pent up stories. Dottie and John wrote the weekly wine column for the Wall Street Journal until quite recently and each year they invited readers to send them accounts of their experiences, some of which appeared in post-OTBN columns.

It was quite an experience reading what other people were inspired to say by the wines they opened that night. Kind of a peek into their souls. I think that was the point, however. As Dottie and John wrote in their final column on January 26, 2010.

Wine isn’t a spectator sport. It’s utterly intimate. Don’t let anyone tell you what you should like, including us. Try wines broadly—there have never been so many good ones, at all prices, on shelves—and keep raising your personal bar for what is truly memorable, so that you are always looking for the next wine that will touch your soul and make you feel you’ve gone someplace you’ve never been before. It’s not about delicious wines. It’s about delicious experiences. May your life be filled with them.

Dottie and John didn’t explain why they left the WSJ — word on the wine blogger street is that it was a simple cost-cutting move by Journal management — but many of us are interested to learn what will happen next.  The old WSJ wine column took a very broad view of wine, with reports that ranged from inexpensive bottlings like Two Buck Chuck to icons like Chateau LaTour.

John and Dottie were not very traditional or pretentious — they constantly pushed readers to try new wines, re-visit old favorites and think for themselves. I hope to see them reemerge on the wine scene soon. (Perhaps on cable TV?)

The Journal hasn’t given up on wine. The wine page has been filled by a variety of writers and topics since the first of the year. I suspect this is a short term measure until a permanent replacement is found.

It seems to me that the WSJ is very ambitious and is trying quite hard to become the Financial Times, rated by many as the world’s best business newspaper. The FT features a weekly column by Jancis Robinson, rated by some as the world’s most influential wine critic.  I expect Rupert Murdoch, the Journal‘s owner, to seek out someone of similar stature to anchor the Weekend Journal section (and attract wine-enthusiast readers). 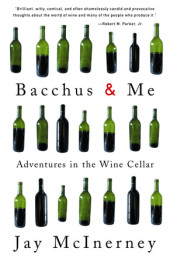 Dr. Vino reports that the new columnist will be Jay McInerney, novelist and former wine columnist for House & Garden magazine. It will be interesting to see what direction McInerney (or whoever gets the job) takes at the WSJ. It is one of the world’s great “bully pulpits” when it comes to wine.

Jancis Robinson uses her position at the FT to promote fine wine in a global context to her audience of “Davos Man” global elites. She has been very effective at raising wine’s profile around the world.

Dottie and John embraced wine and globalization, too, but in a very American way for a broad American audience. They were effective, too, in the American context.

It will be interesting to see what direction the Wall Street Journal chooses, what idea of wine they embrace and what audience they hope to serve. In the meantime, it’s time to open that bottle.

This report just in from the New York Times dining blog:

The Wall Street Journal has confirmed rumors that Jay McInerney will be a wine columnist for the paper, but it throws in an unexpected curveball: his column will alternate, Saturday to Saturday, with one written by Lettie Teague.

We had great wine, spectacular food and fascinating stories on Open That Bottle Night 2010. By the numbers: five and a half hours, ten people, thirteen wines, 75 wine glasses. Here are the food and wine menus — you will have to imagine the stories. Special thanks to Rosemary and Ken for hosting. And thanks to Dottie and John for inventing OTBN.

Wine Menu (listed by vintage year, not the order tasted)

Polenta with Cremini and Porcini Mushrooms and Mascarpone

Cranberries and Cherries in Madeira sauce

Sottocenere with Truffles, Clove and Cinnamon Rub with Ash Rind