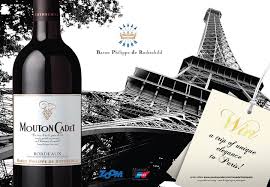 Richard Hemming, whose writing appears on the  Jancis Robinson website, has invented the Mouton Cadet index to measure international differentials in wine prices. It is an interesting project that is worth following.

Hemming’s price index, which he is calling Vinonomics (in homage to the Freakonomics craze), works like this. First he selected a high-volume wine that is in very wide international circulation to serve as the one-item “market basket” for his international comparisons. Mouton Cadet, the ubiquitous Bordeaux wine, is a great choice since it is so widely distributed (a “15-million-bottle, 150-country brand distributed from Andorra to Zimbabwe,” according to Hemming).

Mouton Cadet may not be the wine sold in the most different countries — Moët & Chandon Champagne would be my pick for that honor — but using Mouton Cadet keeps the Big Mac spirit of tracking the price of an everyday product, not a luxury good.

Hemming then searched the internet and other sources for prices of Mouton Cadet in as many countries as he could. He converted these prices to Euro, USD and GBP at market exchange rates and published them on the website. (He is hoping that readers will send in additional price data to help complete the table.)

The price differentials that Hemming finds are quite large.  The French ‘home country” price for Mouton Cadet is given as EUR 9.55, which is incredibly more than the reported price of the same wine in the United States (USD 7.99 or about EUR 6). Within the Eurozone, where trade is allegedly free, Cadet’s price runs as high as EUR 19 in Austria and EUR 21 in Italy. So much for the “Law of One Price!”

What’s the cheapest place in the world to purchase Mouton Cadet? So far Hemming’s low price leader is the U.S., where French wines struggle to sell in a crowded and very competitive market, followed by Hong Kong (EUR 8.56).

The most expensive? South Korea (EUR 26), Brazil (EUR 21.5) and Italy (EUR 21). The difference between the high and low price is stunning. It is easy to explain South Korea’s high price in terms of transportation costs, regulatory expenses and multiple middleman markups, but the high price given for Italy is difficult to understand. Hard to know who would pay so much for Cadet in Italy.

Bordeaux with your Big Mac?

Hemming’s research project is based on  the Economist’s famous Big Mac Index (BMI), which tries to measure the relative purchasing power of different currencies by comparing the local prices of McDonald’s ubiquitous hamburger.  Here is a table showing the index as of July 2010.

The table shows that Japan and Australia are very close to Purchasing Power Parity — the condition where a U.S. dollar has the same purchasing power abroad (when exchanged at market rates) as at home.  The dollar cost of a Big Mac is approximately the same in all three countries.

Norway’s currency is very over-valued according to the BMI.  A Big Mac that sells for USD 3.73 in the U.S. costs a whopping USD 7.20 (converting at market exchange rates) in Oslo. The high cost of buying a Norwegian Krone contributes to the hamburger’s high dollar price there.  The Swiss Franc is almost as over-valued — a Big Mac costs the equivalent of USD 6.19 in Geneva.

Hong Kong and China have undervalued currencies by this measure. A Big Mac costs less than the equivalent of USD 2.00 there. The harburger is cheap in part because the currency is so cheap in these countries.

The Big Mac index is far from a perfect measure of relative purchasing power, but it is not a bad guestimate because Big Macs are standard products with easily discoverable prices and most of the cost of producing a Big Mac takes place within the country in question. I’ve found that if the BMI says a country’s currency is over-valued then it probably is, although not necessarily by as much or little as the index suggests.

The Mouton Cadet index is very interesting for what it tells us about wine prices, but it is probably less useful as a measure of PPP. The wine, of course, comes from France unlike the locally-produced burger ingredients and the local price in South Korea, for example, is influenced by that cost basis (adjusted for exchange rate effects) plus transportation costs. The biggest “local content” factors are the local taxes and  wholesale and retail markups within South Korea, which are probably quite high.

At this point the Mouton Cadet index is most interesting to me for the questions it inspires (I’ve always said that questions are more interesting than answers). Who’s buying that EUR 21 Cadet in Rome (and are they interested in buying a bridge I happen to have for sale?)

What accounts for the high price in South Korea? The exchange rate is certainly  part of it. The South Korea Won is undervalued relative to the EUR according to the BMI. A Big Mac costs USD 2.82 in Seoul and USD 4.33 in Paris — a 50% price differential. The exchange rate therefore might explain 50% of the price gap between the Mouton Cadet price in France and South Korea. What accounts for the rest? (And does that fact that South Korea has no substantial domestic wine industry that I am aware of affect the mark ups on foreign wines?)

And what about Brazil? The Euro is actually  undervalued relative to the Brazilian Real according to the Big Mac index, and so the exchange rate is not necessarily a factor in Mouton Cadet’s high price in Rio. What other factors account for the big price gap?

I hope Richard Hemming continues with this project. It would be interesting to have data for additional countries (Japan? Russia? India?) and to see how the rankings change over time and relative to Big Macs.

I’d like to encourage interested readers around the world to send Hemming local store prices for Mouton Cadet so that he has better data both for international comparisons and to get a sense of intra-country price dispersion.