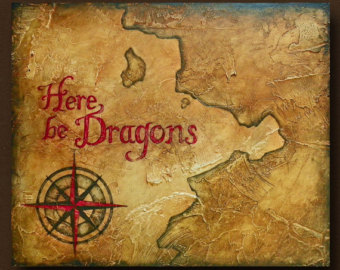 The International Monetary Fund is expected to announce today revised global economic forecasts –– slower growth, higher inflation, and increased uncertainty due to war in Ukraine plus (although I don’t know if it will feature in the IMF report) massive  covid lockdowns in China. Here be Dragons, indeed!

As much as we all would like to think that economic conditions and the global wine market will soon return to what we used to call “normal,” I think it is important to realize that we have actually entered what are in some ways uncharted waters. Old maps and rules of thumb do not necessarily apply and the ability to pivot quickly as conditions change is even more important than in the past.

Sometimes I get to thinking that I’ve passed this point in life one time before. (That’s actually a line from a John Hartford song.) Way back in 1981 I wrote a college economics textbook because I couldn’t find a text that could help my university students understand what was happening to the economy.

The problem (in very simple terms) was that inflation was caused by cost-push not demand-pull factors and had unleashed sustained self-fulfilling inflationary expectations.  The Volker solution was highly restrictive monetary policy that pushed unemployment even higher until the expectations broke. Harsh medicine for a vicious disease.

Zoom ahead to 2002. After years of relatively stable or even falling price levels, inflation is here again at rates that haven’t been seen in the U.S. since the 1980s. The problem this time is a combination of cost-push and demand-pull factors. Higher energy, food, and transportation costs plus persistent shortages of key commodities push prices higher while the huge fiscal and monetary stimuli of the pandemic and post-financial crisis era have pulled inflation higher, too.

This is not a repeat of the 1980s, by any means, but also not like anything we’ve seen at this level in a very long time. I can’t remember seeing such a combination of broad forces aligned to boost demand and constrain supply.

The war in Ukraine adds to the inflationary pressure, especially with respect to energy and food prices, and it is hard to see these forces disappearing any time soon. Even if a truce were declared today, the energy and food price effects would continue for some time. The Chinese covid lockdowns are squeezing production of many manufactured goods at the same time.

Disruptions in global trade and finance are another factor to take into account. For a long time the “China Price Syndrome” kept a lid on prices of manufactured goods. If a company was tempted to raise price, the ready availability of cheaper alternatives from Asia and especially China acted as a constraint. The “China Price” served as a price anchor then, but much less so now because of unraveling trade relations.

Getting from QE to QT

Taken together this is a situation we haven’t really seen before, but the thing that really makes people like me nervous is monetary policy, The Federal Reserve will be responsible for squeezing inflation out of the economic system (just as it was in the 1980s), but financial conditions are different now. We have had very low interest rates for a long time now and wave after wave of quantitative easing (QE — Fed purchases of Treasury and mortgage-backed securities that pump liquidity into the markets). The markets have kind of become addicted to the constant monetary boost.

Raising interests from this very low level can be expected to disrupt financial markets if only because of the mathematical impact on present value calculations. Exchange rates will shift, too, with disproportionate impact of development market currencies.

But the real “uncharted waters” factor is the transition from QE to QT, quantitative tightening. This will initially take place as the Fed’s bond holdings mature and are not rolled over, which takes liquidity out of the market. It will start slow (which still means billions of dollars a month) and could pick up speed if necessary.

The question is how financial markets will deal with this change after having a liquidity drip line month after month for this long? There is nervous talk of another sharp liquidity crisis, but maybe bigger than the last one, which the Fed addressed quickly and well. If key credit markets freeze up and contagion takes place, the Fed will have little choice but to reverse course, opening the door to even higher inflation.

The alternative is a very hard landing as the impact of the financial crisis spreads through the economy. How hard a hard landing? It depends on what it would take to shift inflationary expectations. So you can see the concern — we may be perched on a narrow ledge with higher inflation on one side and financial crisis on the other.

The wine economy operates by its own rules, but it can’t fully escape the forces shaping the economy in general. To repurpose something that is said about the pandemic economic, we aren’t all in the same boat, but we are in the same storm.

Wine has also experienced a combination of cost-push and demand-pull factors, but not uniformly for various categories. Demand-pull, for example, seems focused on more expensive wines. Cost-push is everywhere, however, which means that the crunch is felt particularly in the middle- and lower-price tiers.

Honestly, I cannot remember a time when cost pressures have been so broad and deep. To what extent will price-sensitive consumers push back on price increases? Or will the consumer inflation expectations in general soften attitudes towards rising wine prices? Given that these are uncharted waters, the map holds more questions than answers.