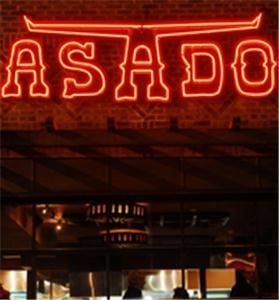 Sue and I and our friends Ron and Mary recently attended a sold-out Bodega Catena Zapata wine dinner at Asado Cucina Argentina in Tacoma.  Some people came for the wine, which Daniel McKeown of Catena importer Winebow carefully explained to each table of guests. Others came for the music and dancing, which was simply spectacular. Everyone enjoyed the wonderful food — the menu is shown at the bottom of this post.

Most of the guests were already familiar with Argentinean wine, but I think some were surprised by the range of wines we sampled, including sparking pink  Malbec (the only non-Catena product), Chardonnay, a Malbec from Vista Flores, a gutsy Malbec blended with a bit of Petit Verdot, and a Cabernet Sauvignon that was served with the chocolate course.

Although Argentina is known for Malbec, its signature grape variety, it is not and should not be defined by it. When we visited Argentina a few years ago our friend Andrés Rosberg made a point of showing us just how much the country has to offer beyond Malbec. You can read about our experience here.

The diners clearly enjoyed themselves and I think we all learned a lot. Hopefully this event and others like it will help interest in and sales of Argentinean wine to continue to grow.

Restaurants are an important wine sales vector, of course, particularly for wines that need to be hand sold because consumers are not familiar with them. When diners try and enjoy a new wine at the sommelier’s suggestion they may become both continuing customers and also brand ambassadors. That’s why there is so much competition to get on a popular restaurant’s wine list.

But sometimes restaurants can have an even bigger impact. Some say that the rising British interest in Argentinean wines in general and Malbec in particular is due to the efforts of a single restaurant group. For the English to embrace the wines of Argentina is a remarkable event given the turbulent history of relations between the countries in the last century, including the Falklands / Malvinas War and the 1986 “Hand of God” World Cup soccer match.

So I think it was quite a bold move to open an Argentinean steak house in London, but that’s what Gaucho did and now they have 14 restaurants in Britain, have invested in Sucre, a popular eatery in Buenos Aires and opened a Gaucho outpost in Dubai. The Gaucho wine list includes more than 200 different wines from Argentina and is said to be the largest such collection outside of that country.

I haven’t dined at a Gaucho restaurant yet, but I hope to remedy that when I’m in London in November. Gaucho seems to succeed by embracing the whole Argentinean experience — the food, wine, people, culture, history — drawing British diners into the story. Irresistible! And great for Argentina’s wine industry.

But wait — there’s more. They have also opened a specialist wine shop in London, Cavas de Gaucho, to promote the wines of Argentina. They purchased a small vineyard with 80-year old vines in Lunlunta, Mendoza and started their own winery, Viña Patricia, which supplies the restaurant group.  Gaucho also sponsors a widely publicized winemaker award in association with Wines of Argentina.

The total “Gaucho Effect” is very important — it shows the story-telling (and selling!) power of restaurants that bring together wine, food and culture in a way that captures consumer imagination.

I used the occasion of the Catena wine dinner to contact Laura Catena, who was just back from Florence and shared a nice story, which was appropriately set in a restaurant. She was dining with some members of the Italian wine industry, enjoying fine Italian food and wine, when she brought out a bottle of Nicolas Catena Zapata 2002 — her winery’s flagship Cabernet – Malbec blend. The Italians were blown away by the wine, she wrote — completely unprepared for the idea that a wine of such elegance could come from far-away Argentina.

I asked Laura about the state of the Argentinean wine industry and she was very upbeat. There are problems, of course, especially with domestic politics and the economy, but all of the elements are there for success, especially in export markets now that the Peso has weakened a bit. Former Central Bank chief Alfonso Prat Gay recently proposed that Argentina would rapidly emerge from its malaise once a new government is elected in October 2015. “Short pain, long gain,” he said, which would be good news for Argentinean wine.

I hope that Laura Catena and  Alfonso Prat Gay are right — Argentina could certainly use some good economic news. Once the country’s political and economic policies are on track, the wine industry seems poised to advance.  Argentina has distinctive terroirs, which many wineries including especially Catena are now highlighting in their wines. And as Laura said,  Malbec continues to be hugely popular because it tastes so good. And then there is diversity …

There are many other varietals that do well in Argentina – chardonnay (we recently received 96 points from Parker for our white Stones Catena Zapata chardonnay), syrah, red blends, torrontes, bonarda, cabernet sauvignon +++ (many Argentines prefer cab to malbec or the blend) and the future holds all these new varieties as well as consumers discovering the high end, the ageability, collectibility (our Estiba Reservada Catena Zapata was recently ranked by wine searcher as one of the 50 most expensive wines in the world.)

I love Malbec and I am one of those who thinks that Cabernet and Cab-Malbec blends (and Syrah, too) have great potential in Argentina. Argentina remains a hot wine category in the United States (along with New Zealand).

How do you sustain such a boom? Obviously quality and value must be present in each glass, but you must also tell the right stories in the right ways to engage consumers and renew their interest.  Wine dinners like the one we attended at Asado (and Laura’s dinner in Florence and the Gaucho Effect in Britain) are an important part of this process.