Karl Polanyi’s classic 1944 book, The Great Transformation presented a theory of how the Industrial Revolution transformed much the world. Polanyi proposed a complex paradigm of acting (economy and technology) and reacting (politics and social movements) forces that combined to shape history.  It is a must read (but not always an easy one) if you are  looking for Big Ideas in an era of disruptive change.

I’m working on my own theory of  “Grape Transformations,” which will be an occasional series here at The Wine Economist. I’m not interested in fads and trends. I want to understand instances where a person or small group fundamentally changed the nature of wine or the way that a type of wine or wine region is perceived.

Jesus is at the top of my list, of course, since he changed water into wine, the ultimate grape transformation. And there is a reason that we call think of this as a miracle. As the always insightful Ken Bernsohn reminds me, inertia is a very strong force in the world of wine (and elsewhere). This is obviously true in the vineyard itself, where years are required to “turn the supertanker” from one grape variety to another. It is also true in the marketplace, where a visible iceberg of wine drinkers interested in trying new things sits atop an invisible bulk of consumers with preferences and habits that are frozen in place (most of them drink no wine at all).

So it really is a miracle (although not in the “fishes and loaves” class) when wine makes a big turn. What are some important examples for my Grape Transformations file?

The Julia Child of Wine 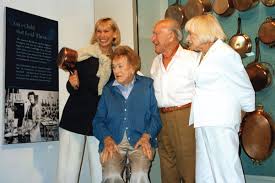 Julia and the Mondavis at the Smithsonian

Let me begin with Robert Mondavi, if only because I discuss his case at some length in Wine Wars. Here’s how the section on Mondavi begins …

Julia Child succeeded, although not by herself of course. American cuisine was transformed by her books and The French Chef, which aired from 1963 to 1973. She changed the idea of food in America. American ingredients, French techniques. Bring them together and cooks could be chefs.

Robert Mondavi did the same thing for wine. He was convinced that American grapes and Old World techniques could produced world-class wines. And he was right. When the Robert Mondavi Winery opened in Oakville in 1966, it was the first major new investment in Napa Valley in decades and it changed everything (not by itself, of course) and paved the way for a distinctly American vision of fine wine that coexists today along with a Gallo-tinted image of mass-market wines.

Mondavi wasn’t alone and he didn’t do it by himself, but I think it is fair to associate Robert Mondavi with the Grape Transformation of American wine. Quite an accomplishment.

The Mondavi of Mendoza

I think of Nicolas Catena as the Robert Mondavi of Mendoza, although I admit that the similarities only go so far. Catena transformation of Argentina’s wine industry is perhaps even more significant because previous winemaking baseline was so low.  Laura Catena tells the story in a very personal way in her excellent book, Vino Argentino. She explains how and why Argentinean wine changed in terms of her family history.

A broader and more detailed account is due for publication in a few months — Ian Mount’s brilliant The Vineyard at the End of the World (I’ve just finished reading an advance copy — watch for a review here nearer the publication date). Placing Nicolas Catena’s accomplishments in a broader context, as Mount does, changes the Catena story a bit and raises new questions, but does not alter our view of the transformative force he helped launch.

I admit to prejudice in this matter because of the courtesy we were shown when we visited Mendoza and visited with Catena and Luca (Laura Catena’s project) winemakers. Nicolas Catena has a PhD in economics and was a visiting professor at UC Berkeley when visits to Napa winemakers (and a meeting with Mondavi) transformed his idea of what New World wine could be. It was a special treat when, during our winery visit, I was given the opportunity to browse for just a moment through Catena’s personal collection of economics texts.

Accept for the sake of argument that Mondavi and Catena belong on the Grape Transformations list. What can we learn generally from their two specific cases? Something, I think, but n=2 is a small sample size so we shouldn’t press too hard. Robert Mondavi and Nicolas Catena have little in common in terms of personality from what I have read. Catena seems be as pensive as Mondavi was outgoing. Both were driven, I suppose, and perhaps that’s the critical factor.

Both took big risks and that seems like an important characteristic. And I think that they both felt that they had little choice but to take risks, although for different reasons and from different perspectives. Mondavi left the family business and forged out on his own relatively late in life. He didn’t have a Plan B — his new winery had to succeed.

Nicolas Catena, on the other hand, unexpectedly ended up with the family business (ruining his plans for an academic career). But Argentina’s wine markets were in a funk — export was the only route open and he (and those who worked for and with him) had no choice but to remake the wine and the business if they were to avoid collapse. No Plan B here, either.

Finally, it is interesting that family is such as powerful theme in both stories, too, and this is something I will try to explore a bit more in future posts. In both cases the transformations that they led began as internal revolutions, dramatic changes within the family way of doing business, and rapidly spread outward.

The family theme continues today. Laura Catena is now the face of the family business even though she still maintains her “day job” as an ER doctor in the San Francisco area where her family lives.  The Mondavi sons carry on the family business tradition, but not of course the actually family business — Constellation Brands purchased the Robert Mondavi brand back in 2005.

I have a couple of “Grape Transformation” stories in mind that I will share in future posts. In the meantime, I hope my readers will use the Comments link to give their thought on this idea and suggest names for the list of people who changed the idea of wine.